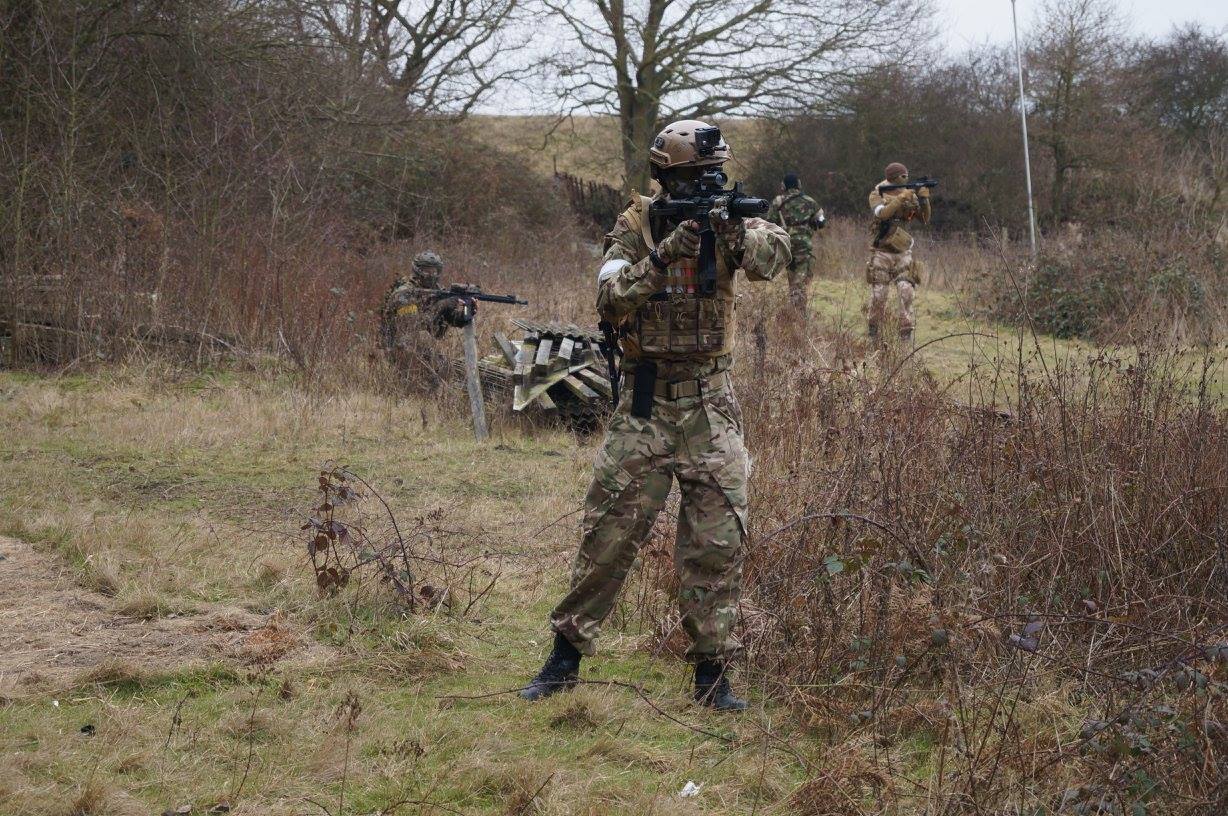 Warm, sunny at times with a light south westerly breeze it was near perfect Airsoft weather.

Two teams, the bands and the non bands played eight games from 10:00 till 16:30 with a fifty minute lunch break.

The warm up game idea was for each team to locate and hold one or both of the bombs. The bands located the bomb from the village area and proceeded to defend vigorously. The second bomb in the urban area was not captured by either team.

“Fort Hell” was next with the defenders having two lives. The attackers had artillery support but the defenders had two fixed position support guns. The bands attacked first and achieved a direct hit on the fort with their fifth shot. This sent all seven of the fort’s garrison to the respawn point. In total the artillery achieved eleven hits. The fort was held for 27:26 minutes after very heavy fighting with one support gun run by Philip in the second story of the Rectory running out of ammo. The fort fell with the attack coming from the north east quarter.

“Domination of Flags” was the theme for the next game, with seven flags on poles over the site however, for the first time, the eighteen buildings in the village had flags too. Each flag pole counted as three points and the buildings as one point. We played the game for 45 minutes with the scores being taken half way through and at the end of the game. For a very long time the bands dominated, at the half way point the bands had 15 points while the non bands had only 7 points. In the last eight minutes of the game the non bands concentrated their players, attacked the village, took a flag pole and several buildings with Terry Gardner leading from the front. The scores at the end were bands 28 points and non bands 29 points.

After lunch “Fort Hell” was reversed with the non bands attacking. No direct hits were achieved however still 10 players were sent to the respawn. The non bands concentrated their attack again, coming from the north east quarter. Three times they attacked and each time the defender line got thinner and thiner, but managed to hold. Another attack was forming up when an attack from the north west got into the fort but again was held by the dug in players behind the fort walls who were able to ambush the attackers as they came through the fort doors. Eventually even these defenders were whittled away with Simon dropping the flag in 35:27 minutes

We played another bomb game next with two bombs but only one needed to complete the objective. A bomb had to be planted along the northern end of the site. This was a fierce game, with the non bands achieving a time of 17:39 while the bands managed 17:10 minutes.

The last two games were the flag games playing from west to east but using only the three valleys. A 15 minute time limit was set and the non bands were 2 metres away from their objective after 15 minutes. The bands decided to do something different. All their team attacked at once down the centre valley where they were able to achieve better concentration of players as the defenders were scattered over the three valleys. The first attack got within 4 metres of the centre objective with the next attack overwhelmed the defenders in 3:50 minutes. See the video (when it has been edited which might take a bit of time!). Very scary.

A huge number of players, who all played well and were a pleasure to marshal. Well done to everyone. As always there are lots of people to thank, the planners who meet up here on the Tuesday before the game to sort out the games, the admin team (sorry about the computer going down), the first aiders, the photographer, the marshals, the cooks. Thank you to all who work so hard to make the day a good one.

With Airsoft, its the players that make the day and yesterday was a good one. So very well done.